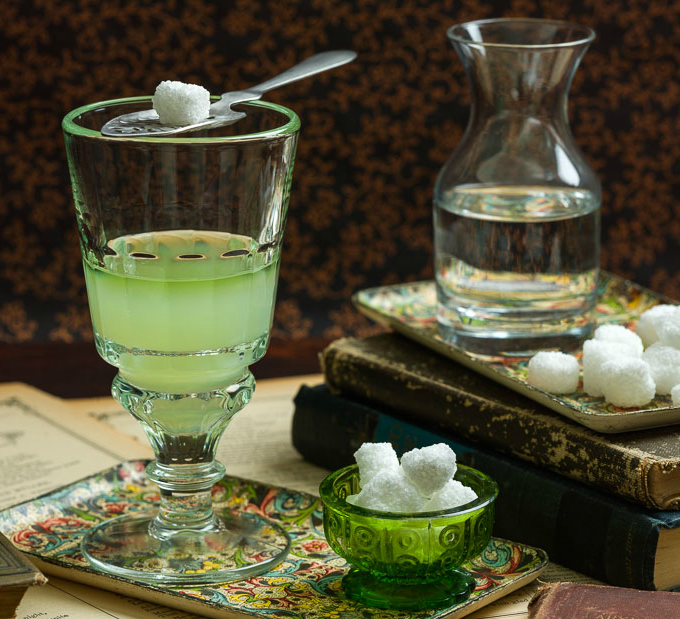 Never had absinthe before? With the spirit being dubiously dubbed as “la fée verte,” or the “green fairy,” I’m not exactly surprised. Although absinthe originally rose to fame in New Orleans (Sazerac, anyone?) and was in vogue among the poets and artists of Paris’ café society, it was eventually vilified in the 18th century with unfounded beliefs that it caused hallucinations, criminal inclinations, suicide, and even mental disorders in those thought foolhardy enough to drink it, and that reputation lingered for many years. But, as Bob Dylan so infamously said, the times they are a-changin’. 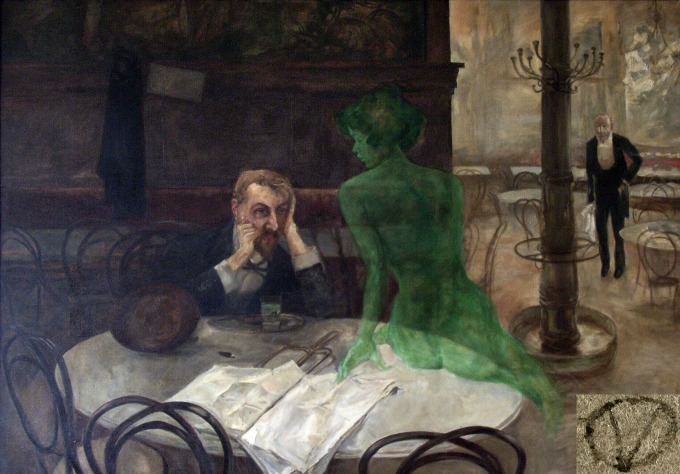 Although the spirit was once banned in Europe and the US, it’s been enjoying a steady resurgence in popularity in the US over the last several years since the (unwarranted) ban was lifted in 2007. Absinthe can not only now be found in cocktail bars and restaurants, but there are even some French-inspired  “absinthe bars” in this country that are devoted to the green elixir.

The distinctively tasting spirit, with it’s pronounced anise, fennel, and licorice undertones can be an acquired taste for some, but I think one definitely worth trying. I personally happen to have taken a liking to absinthe  as an ingredient in cocktails and even food. In fact, one of these days I plan to spend an afternoon at an absinthe bar experiencing the spirit in it’s purest, traditional form by drinking it with an absinthe tower. The process of drinking with an absinthe tower works like this: (1) The top of the tower is filled with ice; (2) absinthe in place in a glass with a slotted spoon across the rim; (3) a cube of sugar is placed on the slotted spoon; (4) several drops of water are slowly allowed to fall on the sugar cube which then drips into the absinthe; (5) the absinthe undergoes a chemical process due to the water droplets called “louching” which turns the absinthe slightly milky or cloudy; (6) sip leisurely.

The stages of louching. {image courtesy of waynesword.palomar.edu}

Don’t worry, I’ll definitely be doing a follow-up post with a recap of that experience whenever it happens.

Sufficiently intrigued? Well check out a few of my  suggestions on how to commemorate National Absinthe Day and celebrating all things absinthe, Bubbleista style:

Do absinthe Ernest Hemingway style by sipping on a “Death in the Afternoon.” The cocktail is made simply of absinthe and champagne, and Hemingway is known to have had 4 or 5 of these babies in a day. But remember, it’s called “Death in the Afternoon” with good reason. The cocktail has a high alcohol content, so unless you’re planning to not remember the afternoon, limit yourself to having just a couple. 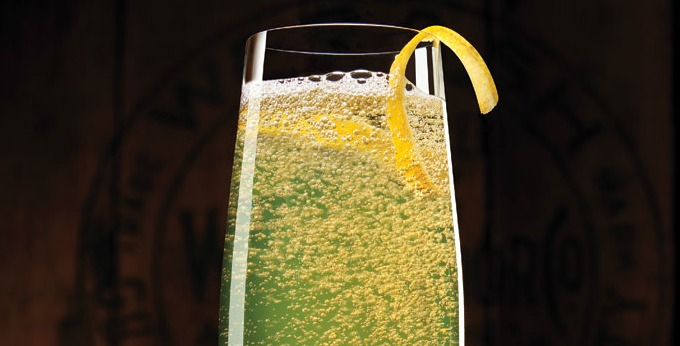 Drinking absinthe is not the only way you can delight in its pleasures; you can eat it too. Case in point: Chef Danny Trace at Brennan’s of Houston has create a decadent, creamy, sinfully delicious Mac and Cheese that has both absinthe and oyster liquor as ingredients. With absinthe and oysters being a excellent pairing in itself, including the two ingredients in a dish is a bit of culinary brilliance in my opinion. Oh Chef Danny, how I heart thee.

While you’re at it–and since Brennan’s has it’s roots in New Orleans–double your absinthe quotient and wash down the absinthe mac & cheese with the infamous Sazerac, a quintessential New Orleanian cocktail made with absinthe or with “Herbsaint.” Herbsaint (which is an anagram of “absinthe”) is an anise-like spirit first produced in 1934 by a pharmacist in New Orleans as a legal substitute for absinthe. Either way, it’s delicious.

Speaking of New Orleans, if you happen to be in the city go visit The Southern Food & Beverage Museum (my kind of museum!) for a tour of their “La Galerie d’Absinthe.” Visitors will have an experience that will “appeal to both connoisseurs and amateurs” alike where they’re given a history of the spirit, as well as get details of the spirit’s historic New Orleans connection. 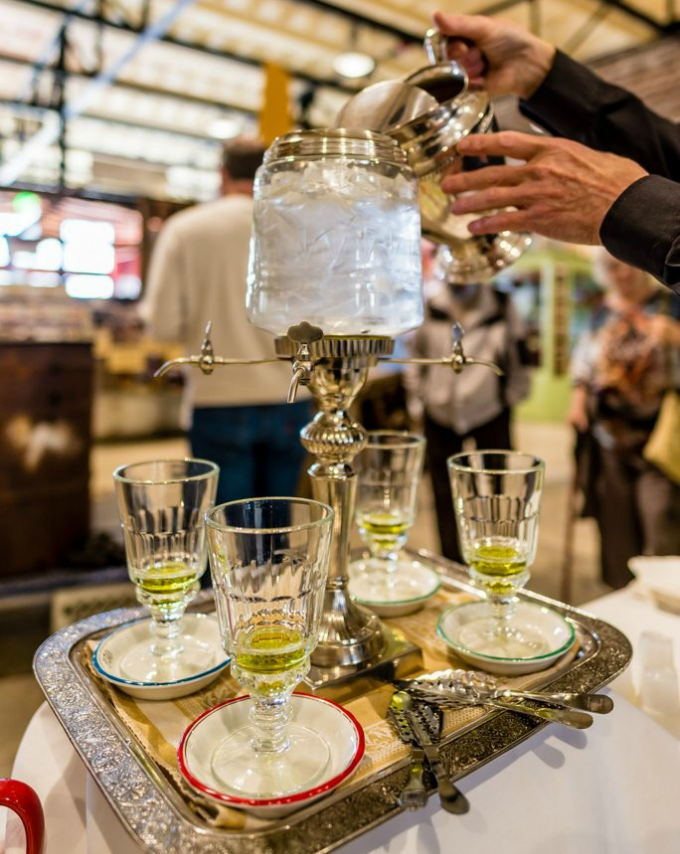 Want to do a little absinthe experimentation of your own at home? While you may not be able to walk into just any liquor store anywhere and buy the spirit just yet, you can definitely get your hands on some over the internet. Here are some absinthes reviewed on Caskers.com that are all #BubbleistaApproved:

Butterfly Absinthe ($80): “Butterfly Absinthe has a delicate aroma of citrus and spice, with additional floral and earthy lemon notes. The palate is bold and sweet, with touches of anise, fennel and mint, and leads to a finish marked by a lingering, peppery spice. The spirit received a perfect 5/5 score from Difford’s Guide, and an “A” rating from Drinkhacker.com.”

St. George Absinthe Verte ($60): “St. George Absinthe has a heady, herbaceous aroma, with hints of citrus, anise and fennel. The aroma opens up to notes of meadowsweet, tarragon and hyssop on the palate, and the addition of water creates an opalescent louche that subtly brings out the flavor of the lemon balm. St. George Absinthe Verte earned the Gold Medal at the San Francisco World Spirits Competition in 2010 and was called “one of the most eloquent absinthes on the market today.”

Lastly, for your concocting pleasure, here are some absinthe cocktail recipes such as the “Absinthe Without Leave” (clever); an Absinthe Sour (for you whiskey people); and an Absinthe Frappé  to help use your bottle of absinthe.

Get your green fairy on for National Absinthe Day–bottoms up!

Share on TwitterShare on FacebookShare on Google+Share on Pinterest
« “Fab Four for Friday” Winter Weekend Round-up: Links I Love
Secrets of the Lyons Den: How to Host the Ultimate Empire Season Finale Watch Party »