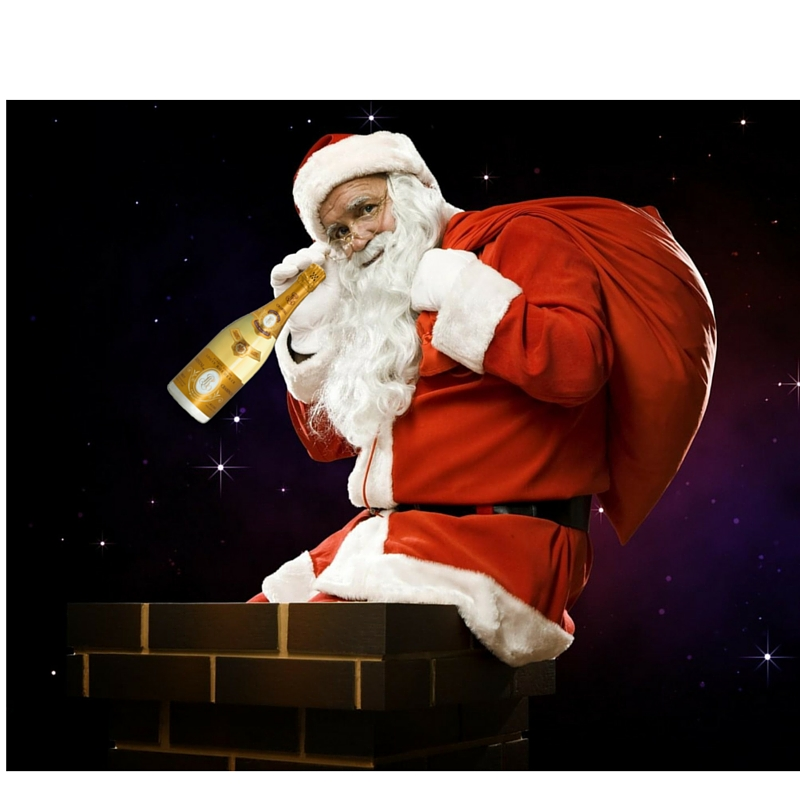 ‘Twas the night before Christmas, when all through the house,
The Bubbleista was trying not to wake up her spouse.

I hung all the stockings by the chimney with care,
In hopes that St. Nicholas would put champagne in there.

I knew it was time to get all snug in my bed;
But visions of champagne cocktails danced in my head.

So I with a top knot wrapped in a silk cap,
Tried to finally settle in for a long winter’s nap.

When out on the wine cellar there arose such a clatter,
Isprang from the bed to see what was the matter.

Away to the kitchen I flew like a flash,
But not before first wrapping up in a pash{mina}.

The beam from the night light gave off a soft glow,
And lit up the crystal flutes above and below.

When what to my wondering eyes did appear?
But a wine bucket sleigh and eight tipsy reindeer!

With a little old driver so jovial and slick,
She knew in that moment it was bottle-toting St. Nick.

The bubbly was stacked in his sack like it wasn’t a game;
Then shouted them out ‘cause he knew them all by name.

To the top of the glass! From the window to the wall!
Now drink away! Drink away! Let’s drink them one and all!”

The wine bucket sleigh swirled as it continued to fly,
Did a loop-de-loop once as it turned in the sky.

Then up on the house-top landed the festive crew,
With the sleigh full of sparkling wine, and some caviar too.

And then, in a twinkling, I heard on the roof,
The popping of champagne by a little reindeer hoof.

As I pulled out a coupe in hopes of a taste,
Down the chimney St. Nicholas came with the bubbly post-haste.

He was dressed all in Armani, from his hat to his boot,
And his clothes pockets filled with effervescent loot.

A bag full of champagne he had flung on his back,
And he looked like a vigneron as he reached in his sack.

His eyes — how they twinkled! He was just so darned merry!
As he sipped on a Poinsettia made from champers and cranberry.

His mouth was drawn up to the flute like a bow,
And the mousse of the bubbly was white as the snow.

The stem of his flute he held casually in hand,
And the bubbles that rose to the top were so grand.

His extensive champers stash kinda made me feel jelly,
I too wanted dozens of champagnes in my belly.

He was cheery and plucky, and I was jolly myself,
‘Cause I giggled with glee as he filled my champagne shelf.

A cool nod of his head, and an all knowing wink
Soon gave me to know there’d be plenty to drink!

He spoke not a word, but went straight to his work,
Putting bubbly in the stockings with a skip and a twerk.

Then laying his finger aside of his nose,
With a bottle in hand, up the chimney he rose.

Then he sprang to his sleigh, with that bottle and a whistle,
And he popped the cork which flew out like a guided missile.

Then I heard him exclaim, as he drove out of sight—
“A bubbly Christmas to all, and to all a fizzy night!” 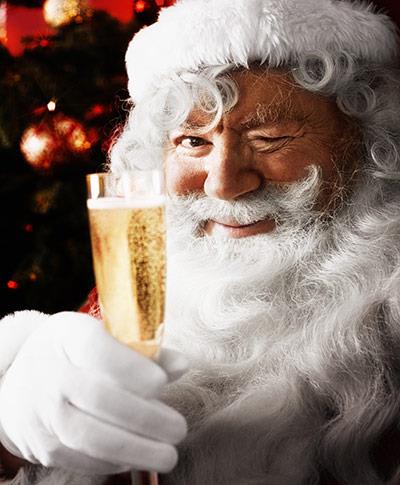