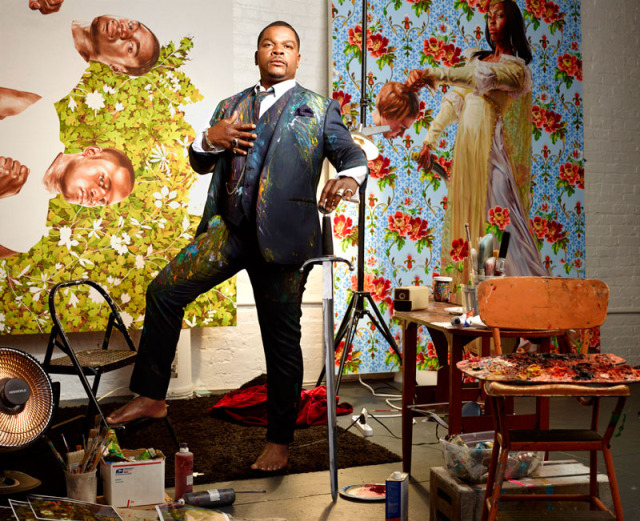 The artistic genius that is Kehinde Wiley

Hello my bubbly loving darlings! As you should know The Bubbleista loves to entertain and plan events–after all, I AM the “hostess with the bubbly mostess” who absolutely despises the status quo. As the saying goes though, “I can show you better than I can tell you,” which is what prompted me to decide to start sharing my fête forays with a new series called “The Bubbleista Entertains!” In this new series I’ll share event recaps; behind-the-scenes peeks; ideas; and inspiration.

For the premiere installment of the series, Kevin Walker–the ridiculously talented creator of the website Afro Bohemian Snob–and I have come together to host an event in honor of the arrival of the Kehinde Wiley exhibit entitled “A New Republic” which is on a selective-city tour only until through 2016 {check out a short write-up on the exhibition here}. We couldn’t allow the artwork of this illustrious artist to go uncelebrated, so we decided to host a brunch complete with music; private docent-led tours; and, of course, mimosas. The event is being hosted on Sunday, September 20, 2015 at The Modern Museum in Fort Worth, Texas.

The gorgeously manicured grounds of the Modern Museum Fort Worth, Texas. Our fabulous brunch will be hosted on the covered patio on the left facing the water.

And if you call yourself a real, die-hard fan of Fox’s uber-successful show Empire, then you know that the artist’s work is featured prominently in the series. I mean, what better art to encapsulate the boldness brashness of the music mogul family that artwork that bold, brash and commanding as well?

Stay tuned for a detailed event recap coming your way soon that will include more information about Kehinde Wiley!

Share on TwitterShare on FacebookShare on Google+Share on Pinterest
« Fizz Friday Roundup: The Champ, The Loser, The Harvest, and The Little Cork That Did
A Bubbleista Birthday, Rosh Hashanah & a “New” New Year »