It’s Wednesday, and that means time for another #WineWednesday Wordologie, my dears! Last week’s #Wordologie edition found us delving into “C” vocab territory and, as I mentioned then, I decided we’d hang out with this letter for just a bit longer, hence the inclusion of “also” in my lovely little title.

We’ve been at this rodeo {Texas girl alert!} a few times already, so no need to prolong things–let’s jump right onto the bull and ride, shall we? 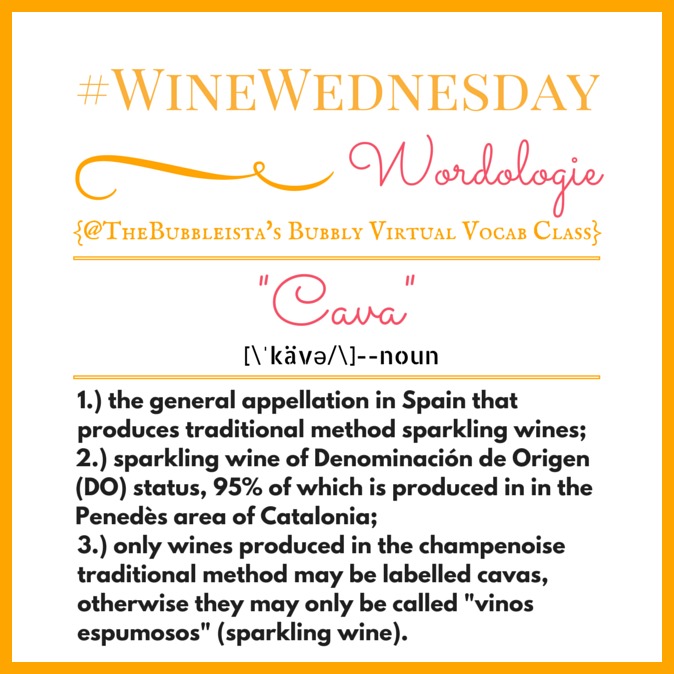 Although sparkling wine was made in Spain as early as the 1850s, the cava industry itself didn’t begin to emerge until the 1860s when Josep Raventós, a member of the Codorníu wine family, visited the Champagne region of France while promoting the Codorníu Winery‘s still wines. He sampled the French sparkling wine; liked it; and was inspired to create his own sparkler in 1872 after the Penedès {located in Catalonia} region’s predominantly red vines were replaced by large numbers of white grape-producing vines due to a devastating phylloxera plague. After that 1st cava was produced, the rest, as they say, was history.

Notably the history didn’t end there however: Catalan cava producers invented the “gyropallet,” a large mechanized device that replaced hand riddling. This proved to be a significant technological development in the production of sparkling wine.

According to Spanish law, and the Denominación de Origen regulatory classification system used for Spanish wines, cava may be produced in eight wine regions: Aragon; the Basque Country; Castile and León; Catalonia; Extremadura; Navarra; Rioja; or the Valencian Community.

Cava is made from macabeo, parellada and xarel-lo grapes using the “Methode Tradicional,” or Traditional Method. This means that, just like champagne, the wine is allowed to go through its second fermentation in the bottle, and the process takes 9 months…hmmm, 9 months. I guess making cava then is sort of like making a little sparkling wine baby.

Cava can be traced back for more than 150 years in Spain, but it only received its name in the 1970s when the Catalan winemakers officially adopted the term to distinguish their product from French champagne. The Catalan word “cava” (plural caves) means cave or cellar. It makes sense when you think about it seeing as though cava production in the early days required the use of caves for the preservation and aging of wine.

Today cava is wildly popular because of its quality; production methods; and relatively wallet-friendly price point. You can get a good cava for as little  as $10-$12. How that’s for a reason to do a happy dance?

THE BUZZ ON THE FIZZ: CAVA FACTS TO KNOW

So how do you go about picking a great cava? Check out these nifty little tidbits of info to learn some fast facts and become a cava-swilling pro in no time.

But wait, there’s more: I went to a “Champagne Alternatives” tasting last week, so I thought it only appropos for this week’s “Fizz Friday” {catch up on last week’s inaugural edition here} to post tasting notes and recommendations on cavas I think you might enjoy–b sure to check it out on Friday!

Next time you’re on the champagne & sparkling wine aisle, check out the cava section–I promise that you won’t regret exploring these lovely Spanish sparklers.

Share on TwitterShare on FacebookShare on Google+Share on Pinterest
« #MotivationMonday: “D” is for Dress The Part
Fizz Friday: Let’s “Hava” Little Cava »