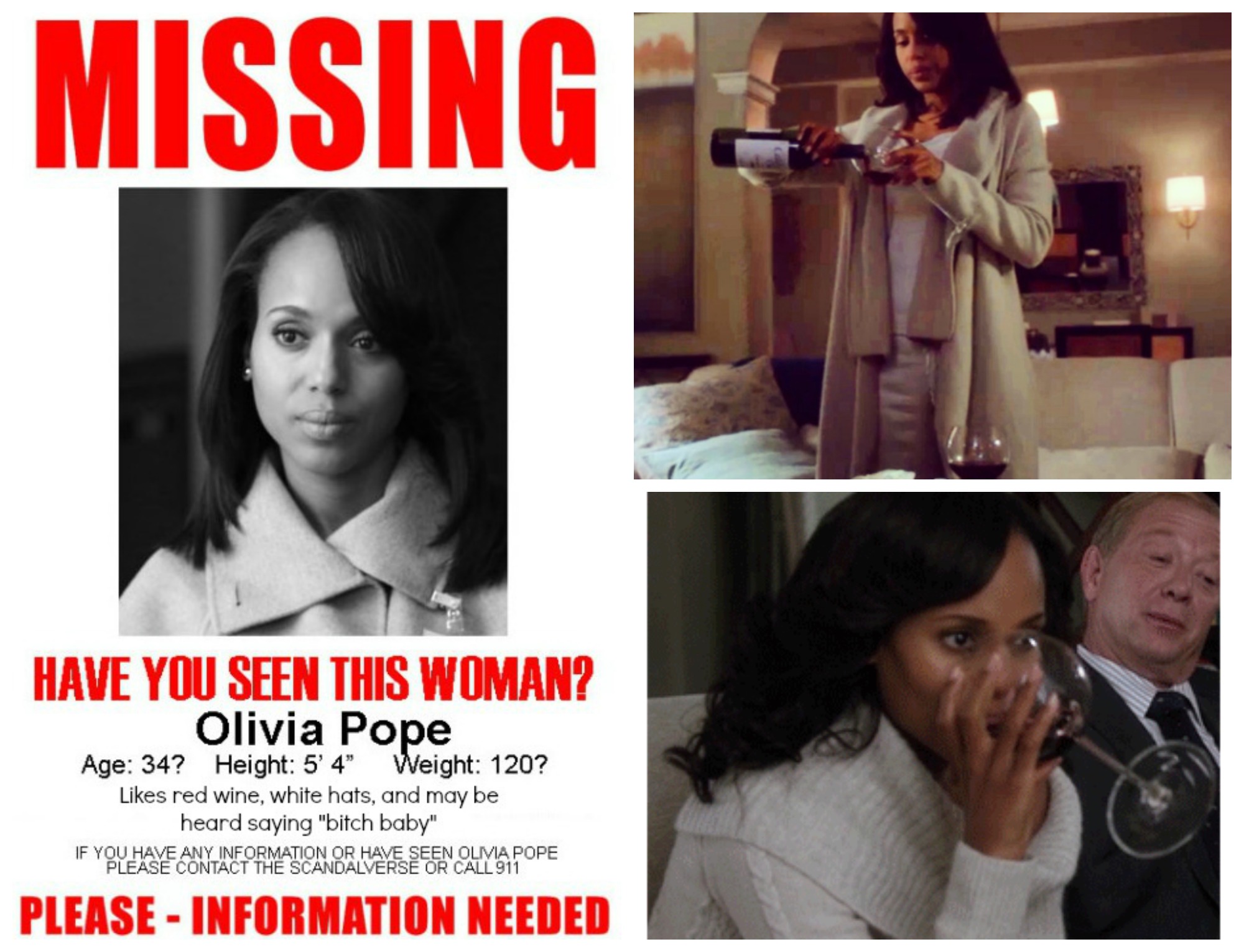 In one week, on January 29th, Scandal returns to television. And if you’re a Gladiator, you’re going absolutely c-r-a-z-y with anticipation. That final scene in the last episode showing Oliva’s glass of expensive red wine spilled all over her beige couch where she has suddenly, and mysteriously, disappeared from…noooooo! What has happened to our Liv?!

I have been racking my brain trying to figure out what Shonda Rimes could possibly be cooking up for this season, and to avoid nervous hair-twirling, pacing, and nail-biting, I decided that libations were in order to soothe and comfort my impatient, anxious waiting. When I was thinking of what to drink of course it only took a split second to decide that there was no better way to calm my nerves in supreme Olivia style than with a good glass of red wine, our heroine’s beverage of choice. 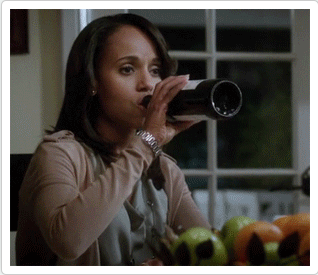 But which red wines should I sip? I asked myself “What would Olivia drink?”  I decided to do a little research to find options worthy of her tastes. And just so you know, in Bubbleista speak, typically research = exploratory drinking. Just felt the need for full disclosure in the spirit of Ms. Pope.

Although I suspect Olivia would drink just about any good quality red wine (she has good tastes but she’s not a wine snob), I knew I still had to do Liv’s palate justice. Since there isn’t any of the rarefied, expensive, high-quality, elusive (and totally fictional) 1994 Chateau du Billet available, I went looking for, and found, some great substitutions. While I was, ahem, researching it hit me: why stop at just selecting some wine to drink? An even better idea would be to pay the ultimate homage to Olivia by hosting a red wine-fueled Scandal Watch Party. After all, misery loves company, and company loves when wine is involved. Brilliant!

A watch party is a great way to entertain and be entertained, with the latter especially depending on whom you invite. And if you’re concerned about how to host a fab party, no worries–I’ve made it easy breezy for you by laying out some good suggestions on red wine picks as well as what snacks to serve based on your varietal preferences, as well as with some fun nods to Olivia and the show. You can thank me later.

With a few exceptions, Red Bordeaux wines are typically made from a blend of 2 or more of the 5 grape varieties (Cabernet Sauvignon, Cabernet Franc, Merlot, Petit Verdot, Malbec) allowed by French law, and each grape type gives a different characteristic to the wine. Each winery has its own blending style, and that is what distinguishes one wine from another.

Since the now infamous “Chateau du Billet” (although with its fictional origins, who knows if that is the correct spelling?) was French, let’s kick things off with the quintessentially French varietal. 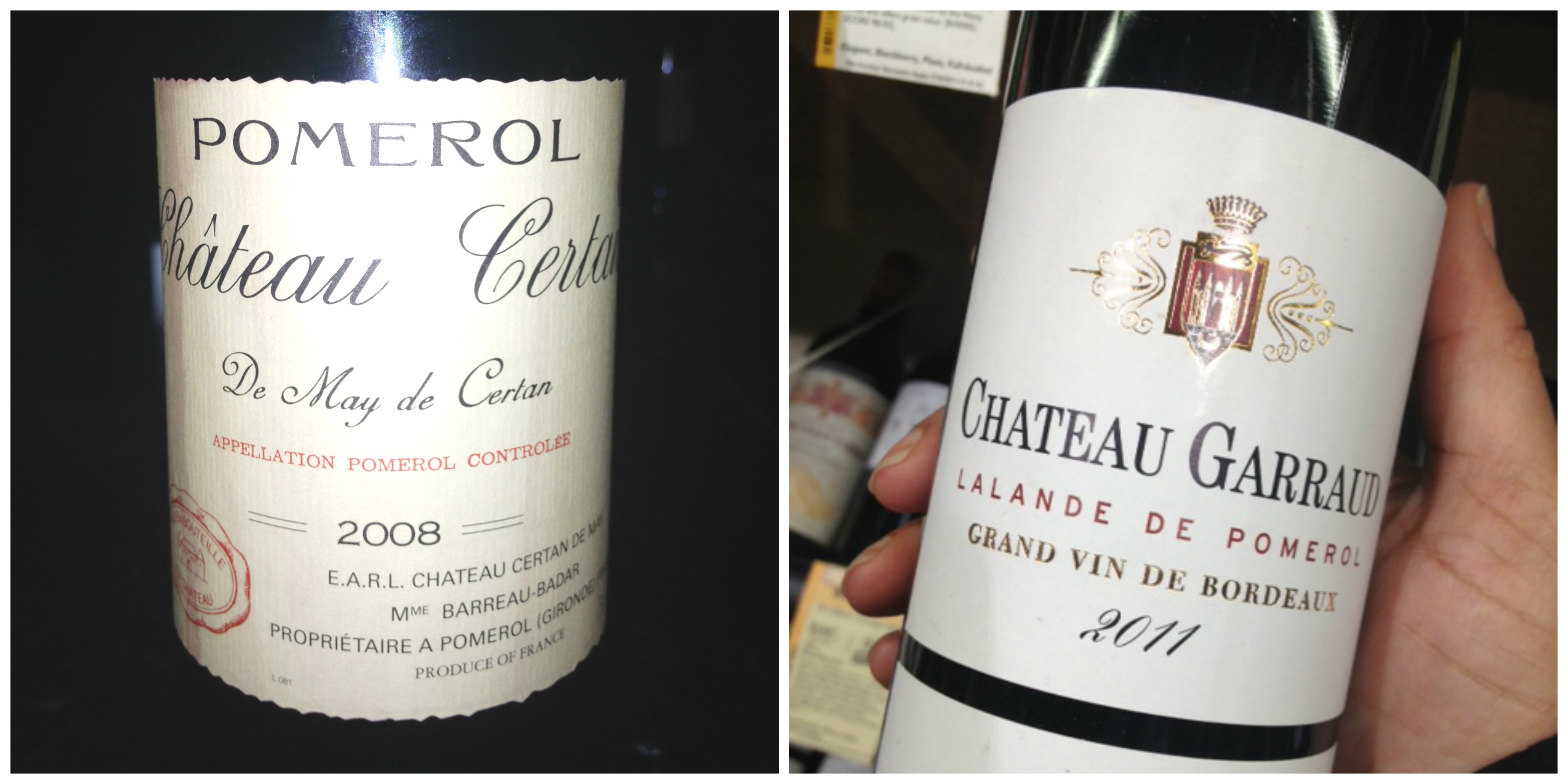 HIGH: Chateau Certan de May ($150)—Another wine with “Chateau” in the name will suffice just fine for the du Billet. I had the pleasure of sipping this lovely Bordeaux at a wine dinner last year and fell in love with it. This smells of plum, raisins, and a chocolaty-coffee aromas, along with floral notes. On the palate it echoes the plum and chocolate from the aroma as well as juicy cherries and raspberries. Heavenly to sip.

LOWER: Chateau Garraud Lalande de Pomerol 2011 ($25)—This wine is made mostly of Merlot and therefore is ripe with blackberry and plum flavors. This is a nice full-bodied wine which makes it Liv-worthy.

PAIR IT WITH: Popcorn, of course! In Season 2 Episode 5, Cyrus shows up to Olivia’s house to complain about James and she responds with “Dinner is popcorn. But lucky for you I just opened a Bordeaux that’ll bring tears to your eyes.” This is apparently an Olivia-approved food and wine pairing, and if it’s good enough for Liv…well, you know the rest.

But you also know The Bubbleista’s philosophy: never do anything ordinary when it’s easy to take it up a notch or 3. Elevate your homemade popped kernels with some make-it-yourself savory, sweet, addictive Magic Dust popcorn seasoning, or make some flavor bomb-a-licious Truffle Bacon Popcorn. Your tastebuds will shout for joy. 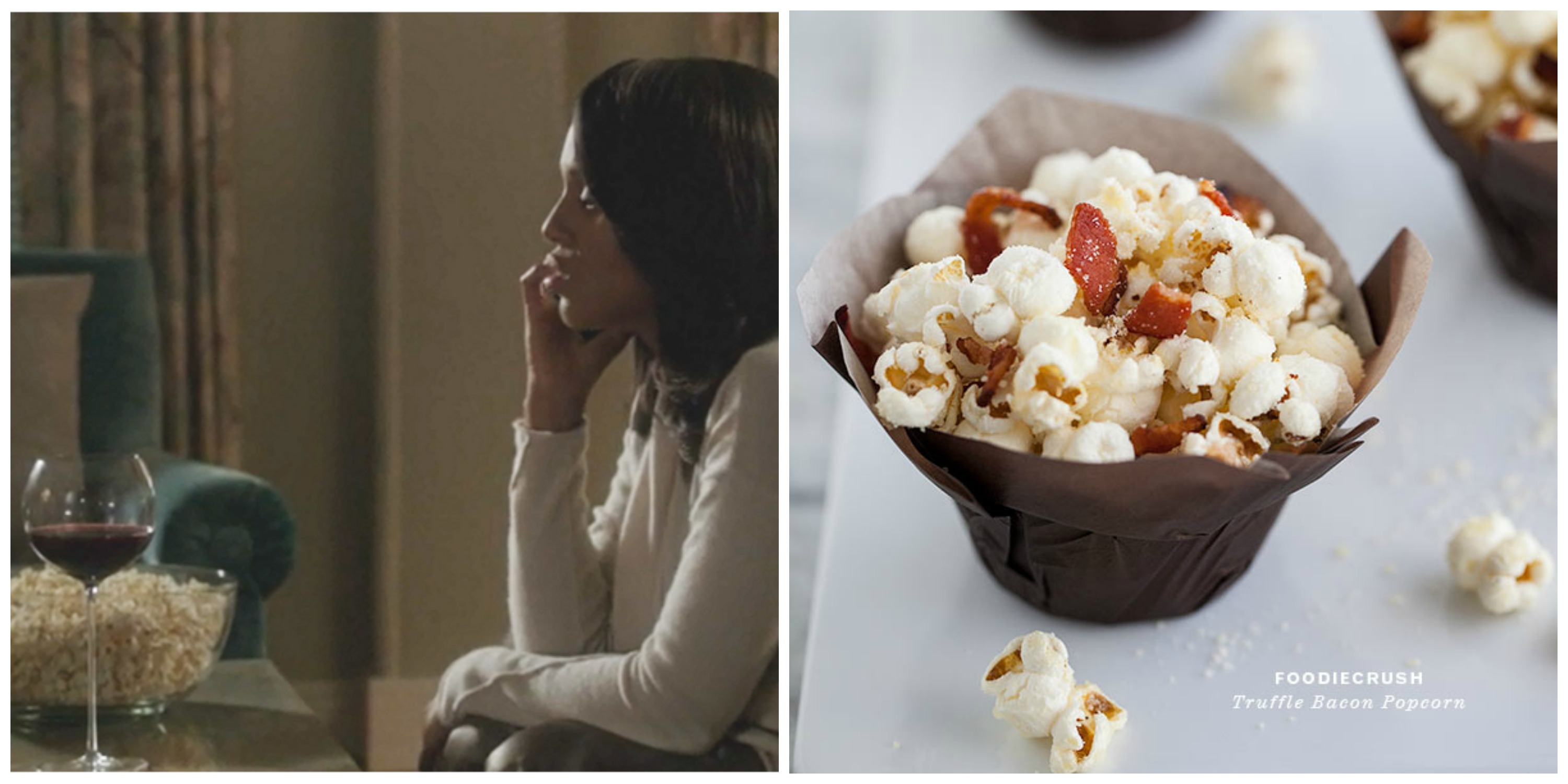 HIGH: For a little wildcard unconventionality (after all, Olivia is anything but conventional), I’m throwing a champagne made from 100% pinot noir grapes into the mix. Blanc de noir is “white from black,” meaning a white wine made from black (Pinot, in this case) grapes, making this a perfect bubbly for red wine lovers.

One of my all-time favorites is the Schramsberg Blanc de Noirs ($50). Soft and rich, it tastes of citrus (orange and lemon), cherry, and vanilla. Spice and pear on the nose.

LOWER: Banshee Pinot Noir ($32)—The name of this wine might make Liv reach for it when she’s had a rough day dealing with the scheming, devious Elizabeth North (played by Portia de Rossi) or a rampaging Mellie (Bellamy Young). This is a rich, aromatic, “red-tasting” wine meaning that it is full of normal red fruits like raspberries, but it also surprises with juicy red plum and spice flavors. 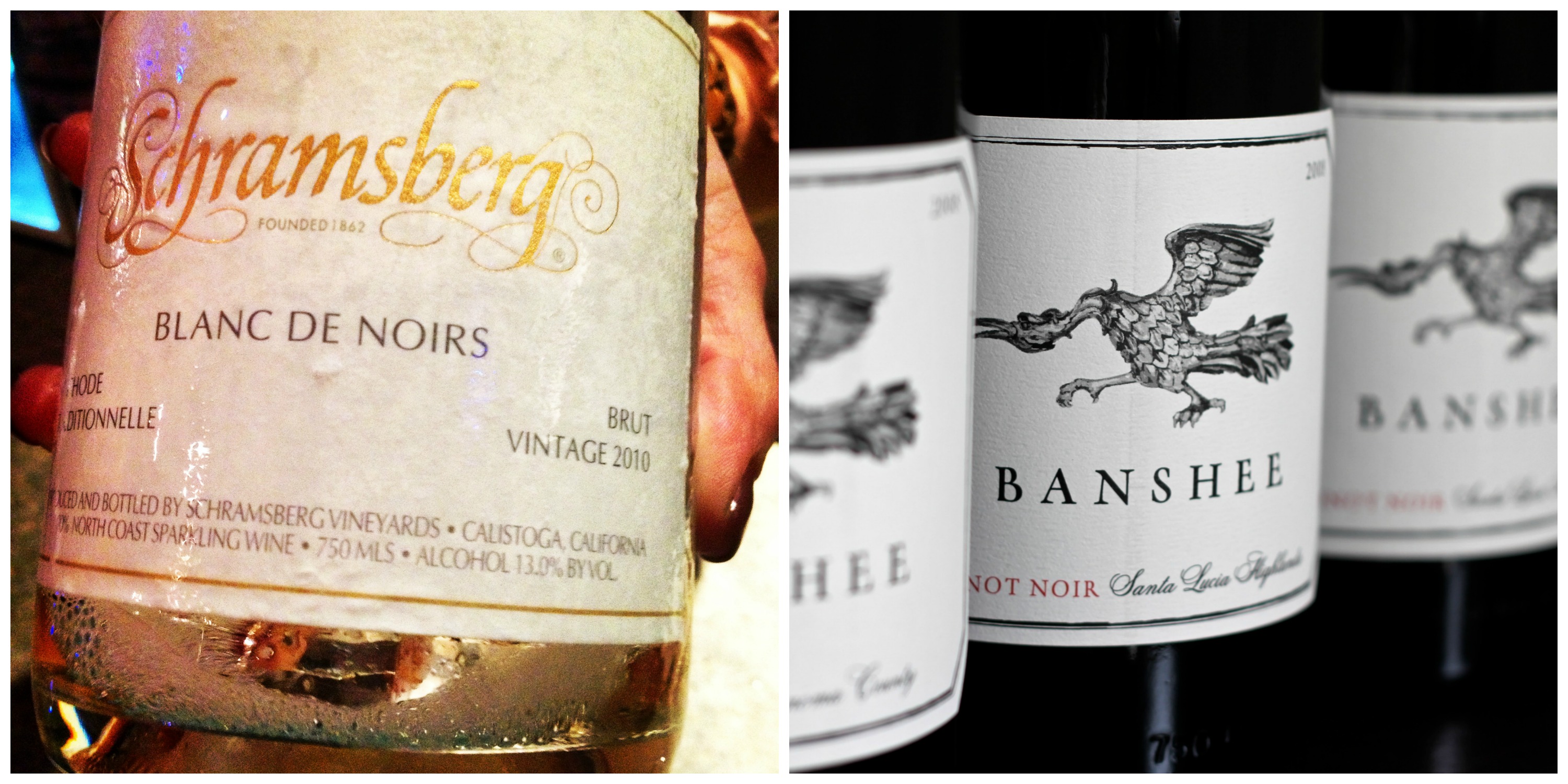 PAIR IT WITH: Pinot noir in general pairs well with gruyere and camembert cheese. A nice cheese plate would be perfect, especially for nervous TV watching nibbling. Serve the cheese alongside a crusty baguette and some homemade jam. You know, the kind Olivia dreams of making one day.

HIGH: Opus One 2011 ($240)–the name of this wine sounds as if it should be the designated wine to sip while sitting on Air Force One en route to Vermont. Opus One, however, is a high profile wine all on it own and has been called “one of America’s first ultra-premium wines.” I have yet to taste this wine (but I plan to change that on trip to Napa this summer!) so I have to give you the wineries tasting notes instead:

“The 2011 Opus One expresses fresh aromas of bright fruit, herbes de provence, bay leaf and cassis which give way to subtler notes of black tea and white pepper. The wine’s round tannins and creamy texture envelop the familiar flavors of fresh cherry, cranberry, and boysenberry with a touch of dark chocolate.”

LOWER: Inkling Cabernet 2012 ($12)–We’ve seen it a millions times: Liv is trying to figure out how to “handle” a seemingly unsolvable situation, when suddenly she gets a gut feeling–an inkling, if you will–follows it, and saves the day. Perfect for when you need a “gut check,” Inkling Cab is deep, dark and rich in color, is mild, and tastes of rich blackberry and vanilla. 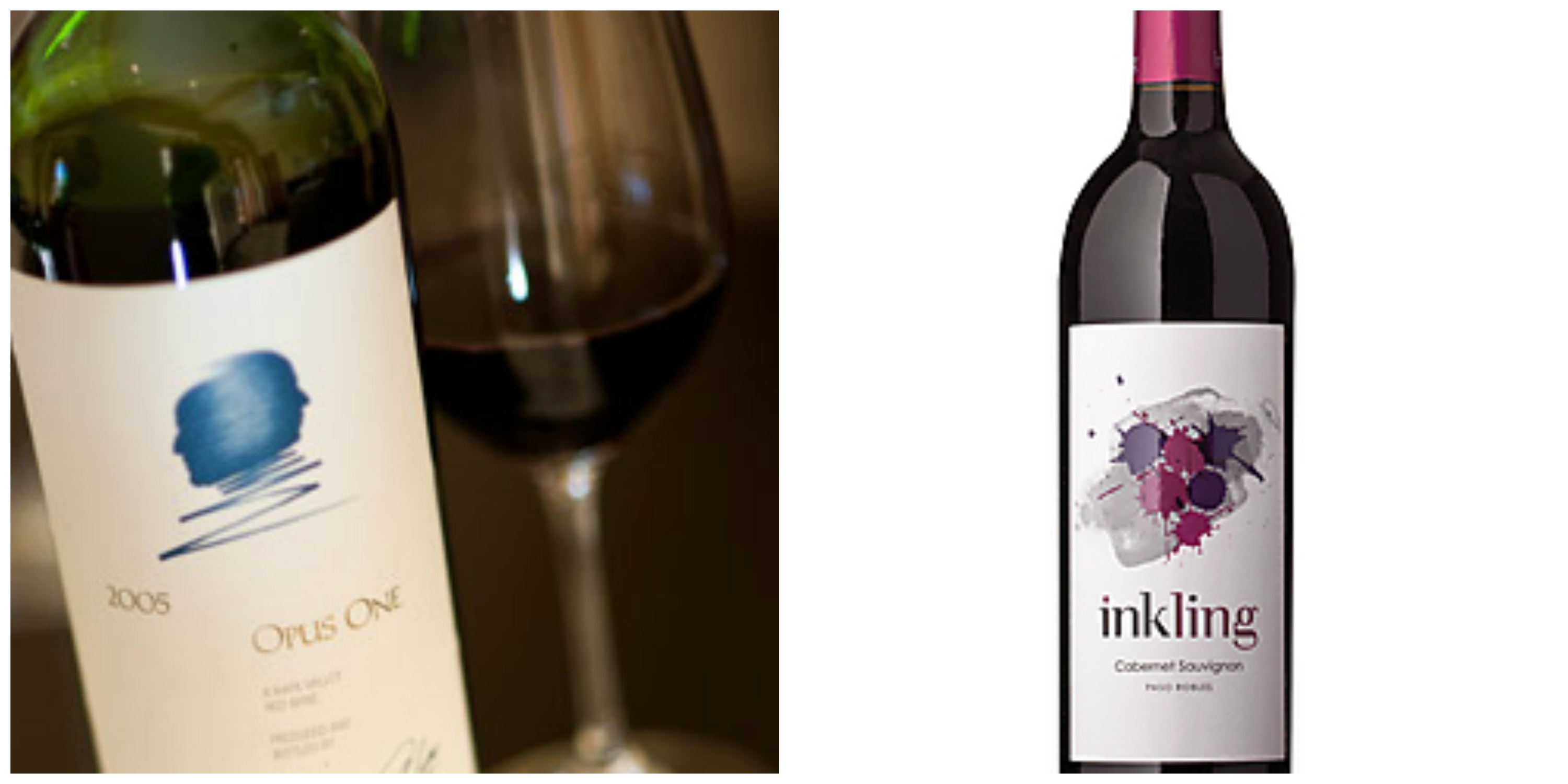 The famed Opus One…which I plan to try this summer. I have a hunch that Inkling Cabernet is easy drinking. (left image © Opus On Winery; right image courtesy Total Wine & More)

PAIR IT WITH: At the close of Season 3, there’s a scene where Liv’s mother, Maya, approaches Liv and Rowan as they are having dinner in a restaurant. While most people’s eyes were glued to the characters, I was doing a quick scan of the table to see what was on Liv’s plate: it was a steak–she eats something other than popcorn, ladies and gentlemen! Olivia knows that red meat is a quintessential pairing with red wine. For a watch party, though, finger foods are best, so I would opt for this delish recipe for Steak Crostini with Blue Cheese Sauce from the cute food-loving blog HighHeelsAndGrills.com 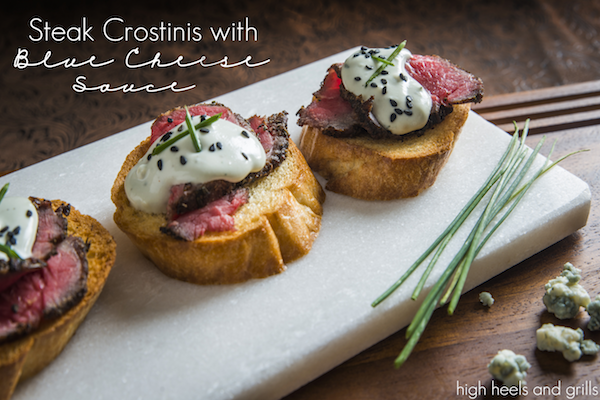 A little effervescent education: Shiraz and Syrah are the same grape varietal, it just that the varietal is called Shiraz in Australia (oh, you Aussies!) and Syrah everywhere else. So if you see Syrah on a label just know you’re drinking a Shiraz and vice-versa.

HIGH: Molly Dooker Shiraz Carnival of Love 2012–with the triangle she’s in, Olivia probably often feels like her love life is indeed a carnival. Think about it: she has to decide which ride to get on (did you see what I did there?); she’s balancing Jake and the President like she is on the high wire; and Fitz’s philosophy is his and Olivia’s love ain’t over until the fat lady sings.

I’ve loved Molly Dooker’s winemaking style for years now and this Shiraz  is the perfect example of why. This wine is grabs you by the collar and pulls you to the glass–it is powerful and seductive. The fruit and spice aromas are very forward at first sniff, and the smells match the palate: smoky, vanilla, black peppercorn, and cherry-berry fruit. Big, full, and lush.

LOWER: Boom Boom Syrah–I am totally convinced after Maya planted a bomb AT A CHURCH (so cray!), which Cyrus knew about but didn’t stop in hopes of Sally Langston being blown to smithereens, at the end of Season 3 that Boom Boom (love the bomb on the bottle!) is so apropos. Herby and smoky, this is truly a, well, flavor bomb. It’s jammy and plummy with ripe black cherries, and it is easy drinking as well due to low acidity. 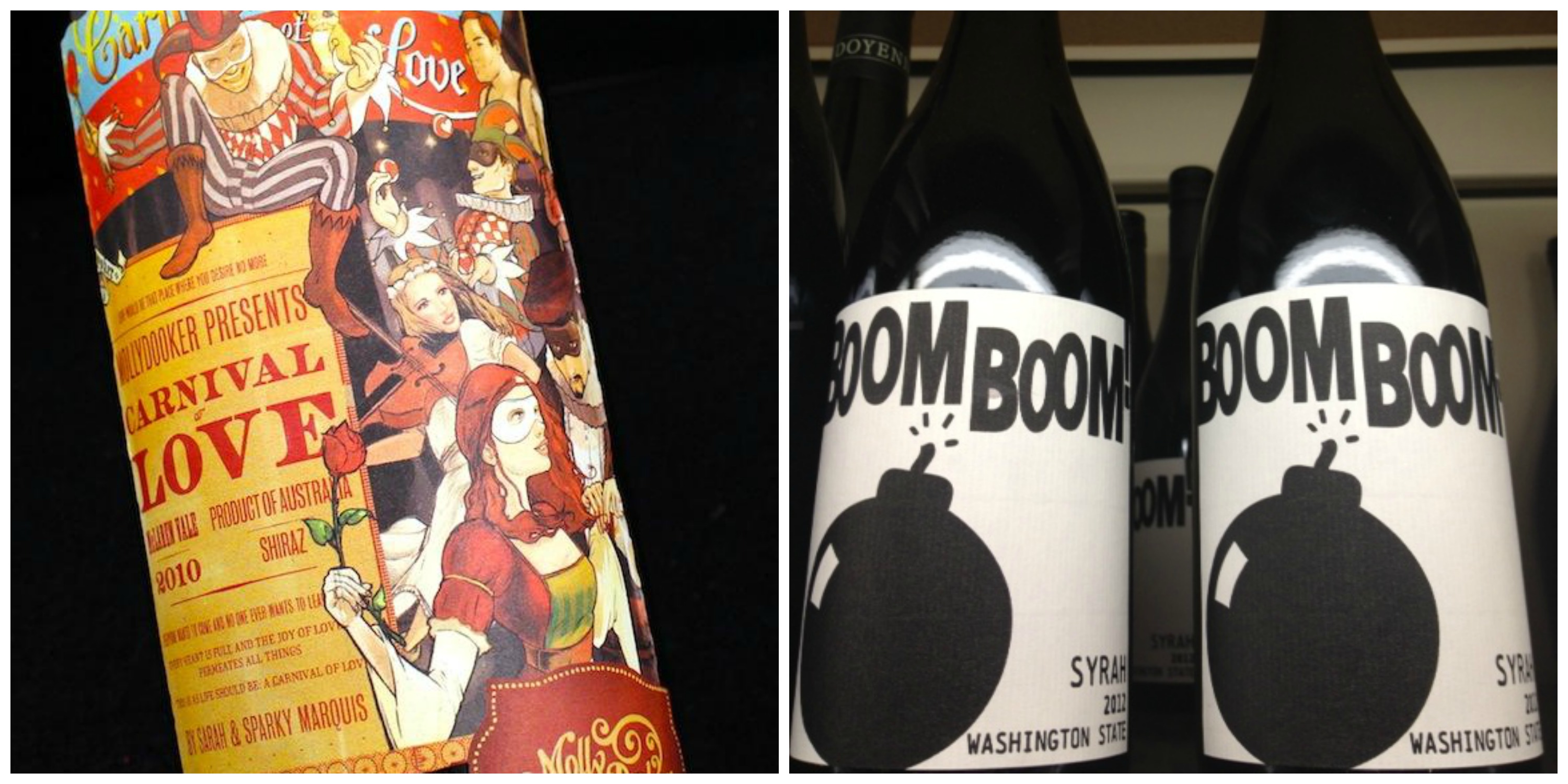 PAIR IT WITH: Pizza! In the final moments of the Season 4 Episode 9 cliffhanger, Liv has brought home a “Dolley Madison” pizza from a place that names their pies after First Ladies (Mellie’s pizza would surely be topped with fried chicken, chips and scotch, no?). We don’t know what ingredients would be on a Dolley pizza, but what we do know is that Shiraz/Syrah pairs well with spicy sausage pizza because the intensity of the spices will match well the intensity of the wine. So order a pizza from your fave pizza joint or make your own flatbread pizza at home. Put your imagination for the ingredients to work and create your own Dolley. I love this quick, 15-minute recipe for DIY pizza. 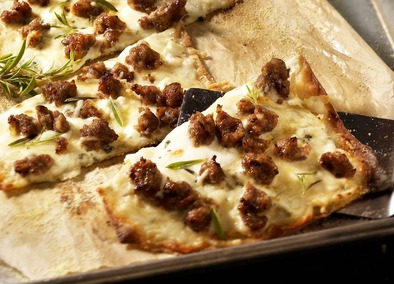 What’s a party without a little entertainment? To “Keep the party going,” play games and trivia based on the show during the commercial breaks and/or before and after the show. Here is a round-up of ideas plucked from the internet:

Wondering what to wear? I think this adorable tee from Etsy shop “Lions and Daisies” sums it up perfectly: 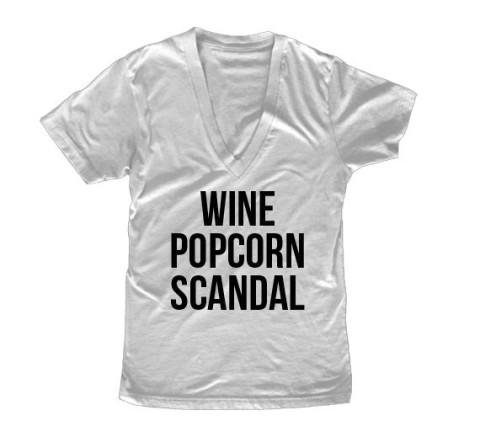 If the shop is sold out, you have plenty of time to get your own made. It’s what a Gladiator would do.

You say you don’t like red wine? *clutches pearls* No problem. As always, you know The Bubbleista has got your back. Check out an article I wrote a while back with my original cocktail recipes based on the Scandal characters.

Whatever tipple you decide to imbibe to “drink like the Pope” on January 29th, make sure you have plenty of it. Something tells me that Shonda is gonna make sure we need it. Where, oh where has our little Liv gone? Oh where, oh where can she be?!

Share on TwitterShare on FacebookShare on Google+Share on Pinterest
« Motivation Monday: Dare to Pursue Your Dream…No Negative Nancys Allowed
Birth of a Bubbleista »