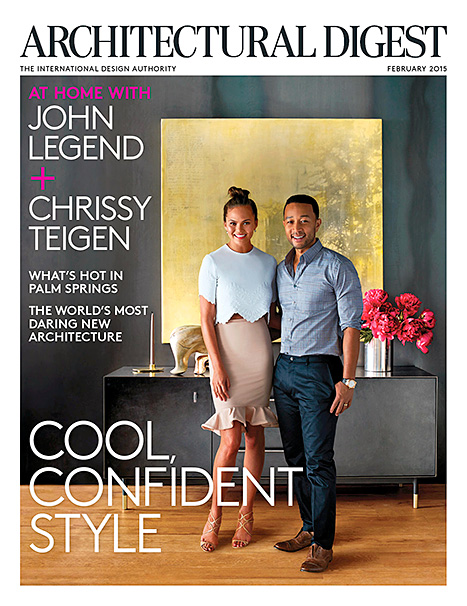 As a person who is big on aesthetics, I’m always enchanted by, and enthused with, wonderful design and decor. Naturally I couldn’t have been more thrilled upon discovering that Chrissy Teigen, who entertains me to no end on Twitter with her hilarious, quirky, “tell-it-like-it-is” wit, and her talented “easy on the eyes” husband John Legend would not only have their Manhattan abode featured in the pages of Architectural Digest, but they were also going to be on the cover.

The couple’s Hollywood Hills residence was featured in a print and digital spread back in March 2013. In keeping with the vibe of California, the space was light and airy with plenty of natural light; light colored material and furnishings; and terraced outdoor spaces dubbed as “Shangri-la” in style.

I was interested in how their design aesthetic would translate to the energy of NYC, and let me tell you it did not disappoint. The East coast residence has a bit of of a darker sophistication with some fun and personal design elements mixed in, but it isn’t pretentious. It still has a relaxed, laid-back feel to it, just like the couple’s Cali home.  A look at the space tells you that fun-loving, creative, and stylish people live there, and it’s definitely the comfy-chic kind of space I could hang out in. Yep, anytime you want to invite me over for drinks Chrissy and John, just let me know. I’ll bring the hooch.

You can check out the entire slide show for yourself, but below are pictures of my favorite rooms and design elements. 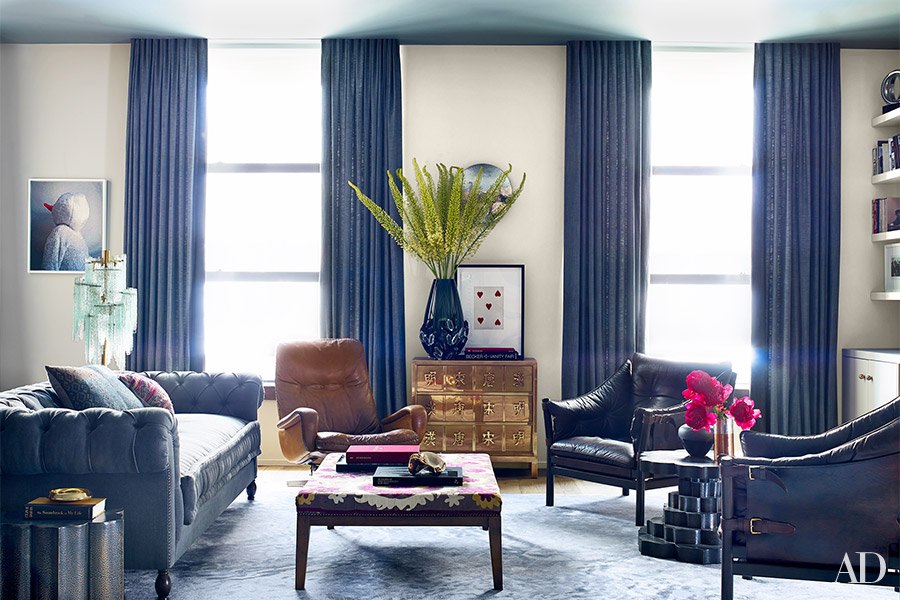 I am crazy about the old world meets modern feel of this room. The pair of dark leather vintage chairs and the ottoman covered with a Suzani meshes perfectly with the Chesterfield sofa. Even though the furnishings are dark, the room still feels light because of the floor-to-ceiling windows and curtains that emphasize the high ceilings. I also love the gold chest with the Chinese characters; it’s a perfect anchor and accent for the room. Although Chrissy has Thai heritage, I’d like to imagine that it perhaps loosely nods towards her Asian roots. 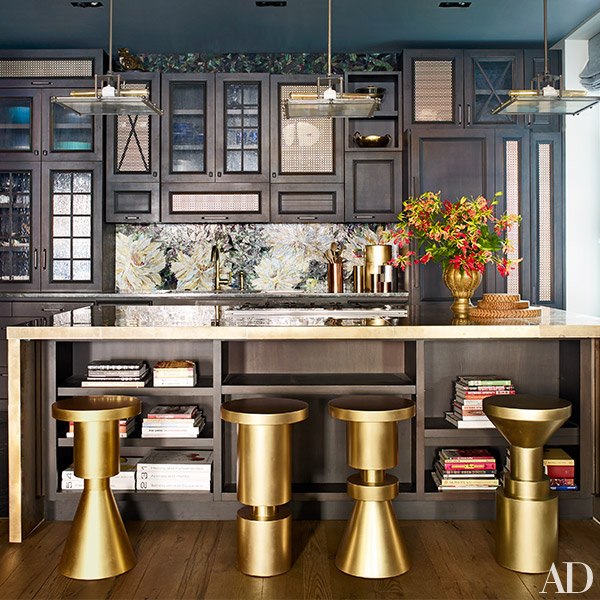 The Manhattan kitchen where John and Chrissy really heat things up. Photography by William Waldron

You can’t look at this photo without being drawn right to those beautiful, shiny bronze stools. They sort of remind me of vintage-mod giant chess pieces and I think it’s design wonderfulness that they are all different. The bronze is repeated on the island as well as the faucet and the containers on the counter. The metal is balanced out by the warm wood island shelving and cabinets. However, my favorite design element is the spectacular custom-made lotus flower mosaic in the backsplash. It’s such a beautiful and stylish personal touch.

If you love Chrissy and John’s digs as much as I do, check out this behind-the-scenes video from Architectural Digest for more.

Share on TwitterShare on FacebookShare on Google+Share on Pinterest
« Sparkling Wine Recommendations: Articles Round-up
Cocktail Tales: One of The Best Spots in New Orleans to Make Your Drink Dreams Come True »